Unravelling the acronyms - a quick run through of words and meanings.

There are various acronyms, words and definitions used to describe people who identify as lesbian, gay, bisexual, transgender, queer and/or questioning, intersex, asexual and/or ally. The definitions below aim to help increase your understanding of these terms and the people who use them to describe their identity. Although these are the meanings generally applied, individuals may give them different descriptions, or nuances. It is always important to have a conversation and find out what a term means to the friend/family member/colleague etc. you are talking to.

LGBTQIA+ Is An Acronym Which Stands For The Following:

Lesbian – A woman who is emotionally and/or sexually attracted to other woman.

Gay – A man who is emotionally and/or sexually attracted to other men.

Transgender – An umbrella term for a person whose gender identity or expression is different to the biological sex they were given at birth. Originally this definition referred to men who identified as women and vice versa. With more knowledge and understanding, it has now been expanded to cover any different gender identity, for example non-binary and gender-fluid (see below). Transgender and sexual orientation are seperate, emotional/sexual attraction is not tied to gender identification.

Queer and/or Questioning – Queer is used as a broad term referring to anyone who is not straight and/or cisgender (see below). It can also be a rejection of labels used for sexual orientation and gender. Although the word queer was used an insult against LGBTQIA+ people, it has, in recent times, been reclaimed as above by the community. However, some are offended by the term. Questioning – A person who is uncertain of their gender identity or sexual orientation.

Intersex – A person born with biological sex characteristics that have not been traditionally associated with the male or female body. There are many variations including ambiguous genitalia, internal sex organs, hormones in puberty that do not match genitalia (e.g. high levels of testosterone in a person with female genitalia). Intersexuality is not linked to gender identity or sexual orientation.

Asexual and/or Ally – Asexual, also referred to as Ace, is a person who experiences a low level of sexual desire, or none at all. This includes people who are interested in a romantic relationship, as well as those who are not and is not limited to a sexual orientation or gender. Ally – A person who does not identify as LGBTQIA+ and wants to demonstrate support, believing in social and legal equality for all.

+ – This plus sign is inclusive and acknowledges there are gender identities and sexual orientations not included in the LGBTQIA acronym.

An umbrella term that is used by some people to cover the whole community. There are also rainbow flags used primarily on gay pride marches and other events. Different colours on the flags represent different parts of the LGBTQIA+ community. The flags have also appeared in music videos, such as Taylor Swift’s You Need To Calm Down, used alongside the lyrics, to raise awareness of the issues faced by the community.

This is a person whose gender identity is the same as the sex they were assigned at birth. E.g. someone who identifies as a man and was designated male at birth is a cisgender man. This is sometimes used as the opposite to transgender.

A person who does not identify as either male, female, or any other term used to describe gender. This may be shortened to enby or N.B. by some people in the community. The term genderqueer may also be used, in a more specific way, for a person who rejects conforming to gender norms and labels. Always check with the person who has used the definition what it means to them.

An individual whose gender identity is not fixed, a person might express themselves as more feminine one day and masculine on another day.

A person who is emotionally and physically attracted to the opposite sex, also known as being heterosexual.

This list of terms is intended to give you a place to start, it is not definitive. There are many other acronyms, terms and identities. If this is an area that interests, or applies to you, start looking at LGBTQIA+ run websites and social media. You will find plenty of helpful articles and like minded people to talk to. Be aware there are also trolls and bigoted sites to avoid, challenge, or anything in between. As the rainbow community grows and evolves, increased understanding of identities means more terms come into common usage. This will, hopefully, lead to an ever more inclusive wider society. 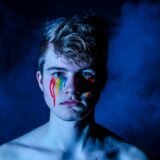