There is a yoga style to suit any age or body type.

Whether you are new to yoga, have tried yoga styles that didn’t work for you, or want to try more, this breakdown will give you a place to start. There are many different forms of yoga, so no matter how old you are, your physical fitness, or weight, there will be several techniques that suit you. 5 of the most popular types are focussed on below, take a look and see which ones appeal, then start your yoga journey.

When you look into the origins of yoga, the Sanskrit word hatha literally means ‘force’ and refers to a system of physical techniques. Over the years popular thinking, generally in the US, UK and Europe, has led to hatha yoga being defined as a method that aims to balance the energies of body and mind. A hatha yoga class will usually mean moving slowly through a series of poses or asanas, which are held according to your ability, the instructor may also teach breathing techniques.

Ashtanga yoga is known as a physically demanding style. Ashtanga means ‘eight limbs’ in Sanskrit, a term attributed to an Indian sage called Patanjali, who wrote The Yoga Sutras. He describes 8 limbs, or practices, that you need to master to recognise your true nature and transcend suffering.

Following on from Patanjali, an Indian yoga teacher, Pattabhi Jois developed ashtanga vinyasa yoga which involves 6 series of challenging poses, primary, intermediate, advanced A and so on, which is what classes are usually based on. Traditionally each student moves at their own pace with the support and guidance of a teacher.

This practice is based on traditional, ancient Chinese philosophies and Taoist principles that believe there are pathways of energy (Qi) that run through the body. Therefore, yin yoga is gentler and slow-paced, with poses that are held for longer than in other styles of yoga. This stretching and deepening into the poses is designed to open blockages and allow energy to flow freely.

Appropriate for any age and level of ability, restorative yoga is also slow paced, focussing on stillness, holding poses for longer and deep breathing. Props, or aids such as folded blankets, yoga blocks and bricks are used to support you in these poses so that you can completely relax. The aim is to physically, mentally and emotionally rest and unwind.

In Sanskrit, the word pranayama comes from prana ‘life energy’ and ayama ‘to extend, draw out’. This ancient Indian practice is number 4 in the 8 limbs mentioned under ashtanga yoga above and refers to the control and regulation of breathing. This is done through specific techniques and exercises designed to prepare your mind and body for the next 4 limbs of yoga.

In a modern yoga exercise class this means synchronising your breath with movements between poses. However, pranayama is also a separate, distinct breathing exercise, to help clear emotional and physical blocks in your body so breath and prana can flow freely.

Yoga can be practiced at any stage in your life, regardless of your physical ability, weight or size. The 5 styles above are just a few of the more popular ones you can try. As yoga is so widespread the odds are high that there are many different classes near you. Take a look, sign up and start benefiting from the increased flexibility, mobility and fitness that yoga can help you achieve at any age. 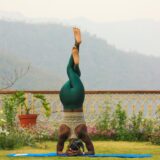 There are yoga styles to suit any age or body type. Use this breakdown to find which is best for you. 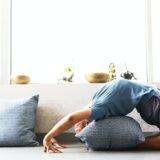 Accessibility: 5 Ways Yoga is for Everyone

Anyone can practice yoga - these 5 household items show its accessibility and versatility. 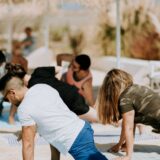 You Don’t Need A Perfect Body To Practice Yoga

Any person of any weight or shape can practice yoga and feel the benefits of doing so.

Mental health is vitally important. It is well established that doing exercise releases endorphins, which are chemicals that lift our mood. 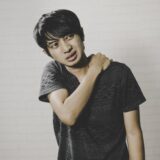 Being pain free: whether it is temporary, from a specific injury, or long-term, a sore back can have a big impact on your life.